A young man was so much overwhelmed with problems that he felt he was at the end of his rope. Seeing no way out, he dropped to his knees in prayer. “Lord, I can’t go on,” he said, “I have too heavy of a cross to bear.” The Lord replied, “My son, if you can’t bear its weight, just place your cross inside this room. Then, open that other door and pick out any cross you wish.” 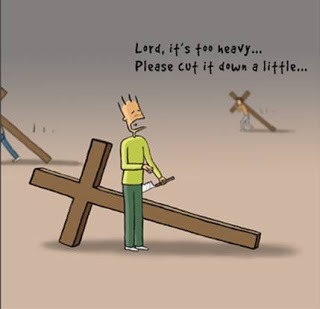 The man was filled with relief and said, “Thank you, Lord,” and he did as he was told. Upon entering the other door, he saw many crosses, some so large the tops were not visible. Then, he spotted a tiny cross leaning against a far wall. “I’d like that one, Lord,” he whispered.

And the Lord replied, “My son, that is the cross you just brought in.” When life’s problems seem overwhelming, it helps to look around and see what other people are coping with. You may consider yourself far more fortunate than you imagined.

Sorry, no Tweets were found.